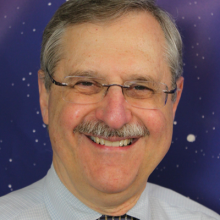 Andrew Fraknoi retired in 2017 as the Chair of the Astronomy Department at Foothill College after 25 years in that post.  He now teaches non-credit astronomy classes through the University of San Francisco Fromm Program and San Francisco State’s OLLI program.  Fraknoi was named Professor of the Year for the state of California in 2007 by the Carnegie Endowment for Higher Education. For 14 years, he served as Executive Director of the Astronomical Society of the Pacific, founding its newsletter for teachers and several national education projects.  He continues to be the moderator of the Silicon Valley Astronomy Lectures, and appears regularly on regional and national radio, explaining astronomical developments in everyday language.

Fraknoi is the lead author of a free, open-source, introductory astronomy textbook published by the non-profit OpenStax project at Rice University.  He has written two children’s books on astronomy, including When the Sun Goes Dark, a book on eclipses, and is author or editor of several activity books for teachers.  Two of his science fiction stories have been published in anthologies, including in Science Fiction by Scientists published in 2016 by Springer.  He was co-founder and editor of the journal Astronomy Education Review. Fraknoi has won the Gemant Prize of the American Institute of Physics, the Education Prize of the American Astronomical Society, the Faraday Prize of the National Science Teachers Association, and several other awards. Asteroid 4859 has been named Asteroid Fraknoi to honor his contributions to the public understanding of science. For more about his work, see: www.fraknoi.com