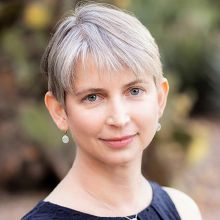 Emily is a freelance science writer and speaker with expertise in planetary geology, robotic exploration of the solar system, and science education. She has taught middle-grade science, written for numerous websites and magazines including those of The Planetary Society, Sky & Telescope, and BBC Sky at Night, and advised space professionals on effective science communication. She is an illustrator and leader in a global community of amateur space image data processors. Her first book, The Design and Engineering of Curiosity: How the Mars Rover Performs Its Job, was published in 2018.

She is a member of NASA’s Planetary Data System Ring-Moon Node Advisory Council, managed by the SETI Institute, and the Board of Open Planetary, and the Advisory Board for the Society for Women in Space Exploration. The Open University awarded her an honorary doctorate in 2017 in recognition of her contributions to communicating space science to the public.