A meteorite was found in Botswana’s Central Kalahari Game Reserve (CKGR) that is a fragment of asteroid 2018 LA. This small asteroid was discovered in space by the University of Arizona's Catalina Sky Survey on June 2, 2018, eight hours before hitting Earth. 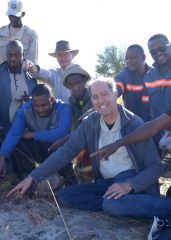 (Mountain View, CA, July 6, 2018) A meteorite was found in Botswana’s Central Kalahari Game Reserve (CKGR) that is a fragment of asteroid 2018 LA. This small asteroid was discovered in space by the University of Arizona's Catalina Sky Survey on June 2, 2018, eight hours before hitting Earth. The asteroid burst through the upper atmosphere and resulted in a meteor fireball.  The asteroid detonated a few seconds after entry and the explosion was witnessed in Botswana and neighboring countries.

"The biggest uncertainty we faced was to determine where exactly the meteorites fell," says Peter Jenniskens, a subject expert of the SETI Institute in California, who traveled to Botswana to assist in the search.  He teamed up with Oliver Moses of the University of Botswana's Okavango Research Institute (ORI), to gather security surveillance videos in Rakops and Maun to get better constraints on the position and altitude of the fireball's explosion. Team member Tim Cooper of the Astronomical Society of Southern Africa calibrated videos to the south.

After disruption, the asteroid fragments scattered over a wide area, blown by the wind while falling down. Calculations of the landing area were done independently by the NASA-sponsored group headed by Jenniskens, as well as by Esko Lyytinen and Jarmo Moilanen of the Finnish Fireball Network. These calculations were defining the fall area well enough to warrant the deployment of a search expedition.

The first meteorite was found after five days of walking and scouring a landscape of sand, thick tall grass, shrubs and thorn bushes by a team of geoscientists from the Botswana International University of Science and Technology (BUIST), the Botswana Geoscience Institute (BGI) and from ORI, guided by Jenniskens. The Botswana Department of Wildlife and National Parks granted access and deployed their park rangers to provide protection and participate in the search.  BUIST student Lesedi Seitshiro was first to spot the stone.

This is only the second time in history that a small asteroid observed in space was recovered following its impact on Earth.

"As geologists from BIUST we see it as our mandate and duty to respond quickly to events like this one and to recover the material, both for research purposes and as part of the heritage of Botswana," explains Prof. Alexander Proyer, leader of the joint expedition. "The challenge was to search for a meteorite in 200 square kilometers of uncharted wild in a park teeming with elephants, lions and snakes.”

"Meteorites are protected under Botswana law," says Mr. Mohutsiwa Gabadirwe, senior curator of the Botswana Geoscience Institute, who coordinated the access to the protected fall area in the game reserve. "This meteorite is a priceless piece of rock that the people of Botswana will want to enjoy seeing on display for generations to come."

The Catalina Sky Survey project is one of several sponsored by NASA’s Planetary Defense Coordination Office in the United States.