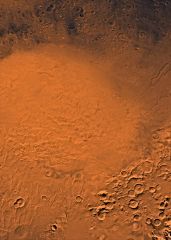 November 1, 2018, Mountain View, CA -- The northeastern rim region of Hellas impact basin, located in the southern hemisphere of Mars, contained numerous ephemeral lakes throughout Mars’ history, a new study reveals. A new paper published in Astrobiology examines a region where depressions may have hosted ponding water that originated from different sources, including precipitation, fluvial transportation, and ground water. Sediments partially filled the depressions or formed fan shaped deposits within these paleolakes. Some of these paleolakes formed in fresh to degraded impact craters; others were situated in depressions of rolling terrain – paleolakes, that are lakes that existed at a time when the climate where it was located was different than today. The paper’s authors are Henrik I. Hargitai, who conducted the research while at NASA Ames Research Center; Virginia C. Gulick, SETI Institute; and Natalie H. Glines, SETI Institute.

The candidate paleolakes are identified along drainage systems that emptied into smaller depressions at the margin of Hellas Planitia, the largest and oldest impact basin on the surface of Mars, terminating in almost the same elevations along a 250 km long line.

"We have found several groups of paleolakes with different geologic histories along each drainage system", the authors explain. Some paleolake groups served as the source of km-wide, hundreds of km-long channel systems, while others formed through-flowing or terminal lakes. “Some of the inlet channels and their deposits are similar to those produced by flash floods,” the lead author, H. Hargitai explains. “Some of these flood discharges may even have been catastrophic in magnitudes (~ several 105 - 106 m3/s), similar to those that formed the Channeled Scablands in eastern Washington state, while the morphology of other channels and valleys suggest much lower, longer duration discharges more like those of the Mississippi River,” co-author Gulick added. “These hundreds-of-meters-wide channels cut across widespread ash-laden volcanic lava and impact debris terrains across the interior slope of Hellas basin”.

Through-flowing lakes are identified from two connecting channels, one inlet and another outlet. Minor inlet channels in these sites suggest that these lakes were filled by ground water and provided only a minor water discharge on the surface. Other lakes may have been filled during occasional floods, and several impact crater lakes were identified as fed precipitation, likely in the form of snow.

One terminal impact crater paleolake is nearly filled with smooth sediment, which is similar to that found in the salars (saline lakes) in the Andes mountain region of Patagonia. This similarity suggests that conditions on Mars may have been comparable to those at the high-elevation, cold, and arid Andes region at the time when those lakes formed.

The list of 34 new candidate Martian paleolakes was compiled from a detailed hydrogeographic analysis of the Northeast Hellas region, where only one impact crater paleolake had been previously identified. This suggests that Mars was hydrologically much more active than previously recorded and that some regions hosted numerous lakes periodically throughout Mars’ history. The lakes were fed by different hydrological processes, likely related to recurring hydrothermal activity from nearby volcanoes Hadriaca and Tyrrhena Paterae.

The paper, entitled “Paleolakes of Northeast Hellas: Precipitation, Groundwater-fed, and Fluvial Lakes in the Navua–Hadriacus–Ausonia Region is published in Astrobiology 18, Number 11.

The article is available here.

You can learn more here: https://hargitaihenrik.wordpress.com/2018/11/06/ne-hellas-paleolakes/