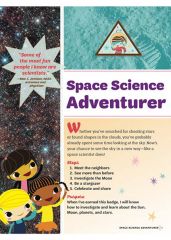 August 14, 2018 (Mountain View, CA)—The SETI Institute and Girl Scouts of the USA (GSUSA) have come together to celebrate the release of new Girl Scout Space Science badges during the launch of NASA’s Parker Solar Probe, the first-ever mission to “touch” the Sun.

Funded by NASA’s Science Mission Directorate and led by the SETI Institute, each badge was developed by GSUSA in collaboration with the SETI Institute’s subject matter expert partners from the University of Arizona, ARIES Scientific, and the Astronomical Society of the Pacific, as well as Girl Scouts of Northern California. To guarantee that only the highest-quality content made its way to girls, GSUSA led three rounds of national pilot and field testing to ensure the activities are fun, age-appropriate, and achieve the program’s learning outcomes.

The Space Science badge development is part of the SETI Institute’s and GSUSA’s broader “Reaching for the Stars: NASA Science for Girl Scouts” program. Other program features include train-the-trainer workshops for girls and volunteers, including the Astronomy Camp for Leaders at the University of Arizona; the Girl Scout Astronomy Club training at NASA’s Goddard Space Flight Center for girls, volunteers, and amateur astronomers; and, most recently, Girl Scouts’ Astronomy Adventure Destination at the University of Oregon’s Pine Mountain Observatory, where campers learned how to operate telescopes, participated in solar and dark-sky observations, and other space science activities.

Exposing girls to STEM at a young age is vital to developing their interest in STEM careers, and is great way to foster a lifetime love of the cosmos.

“Space exploration and astronomy are exciting topics for teaching science and promoting STEM.  We are thrilled to be partnering with GSUSA on this powerful NASA-funded STEM initiative,” said Bill Diamond, CEO of the SETI Institute.  “The prospect of influencing the education and career choices of millions of young girls over the coming years makes this one of the Institute’s most compelling programs ever!”

“Girl Scouts is excited to celebrate the release of these new Space Science badges with SETI and NASA,” said Girl Scouts of the USA CEO Sylvia Acevedo. “As a rocket scientist myself, I first developed my passion for space and astronomy on a camping trip with my Girl Scout troop. It’s so exciting to think how earning these badges will expose the next generation of girls to new passions, new pursuits, and new ways of thinking about the cosmos.”

Booklets that detail the requirements for the Space Science Explorer, Space Science Adventurer, and Space Science Investigator badges are now available online at girlscouts.org and will be in Girl Scout council stores mid-August.

Harman and Diamond witnessed the NASA Parker Solar Probe launch together on August 12 in Cape Canaveral, Florida. They were joined by Denise Ryan, Federal Relations Manager for GSUSA who escorted two Girl Scouts, and co-investigator Lou Mayo of ARIES Scientific.

We're Girl Scouts of the USA
We're 2.6 million strong—1.8 million girls and 800,000 adults who believe in the power of every G.I.R.L. (Go-getter, Innovator, Risk-taker, Leader)™ to change the world. Our extraordinary journey began more than 100 years ago with the original G.I.R.L., Juliette Gordon “Daisy” Low. On March 12, 1912, in Savannah, Georgia, she organized the very first Girl Scout troop, and every year since, we’ve honored her vision and legacy, building girls of courage, confidence, and character who make the world a better place. We’re the preeminent leadership development organization for girls. And with programs from coast to coast and across the globe, Girl Scouts offers every girl a chance to practice a lifetime of leadership, adventure, and success. To volunteer, reconnect, donate, or join, visit www.girlscouts.org.